Yesterday, I posted an article about thermal camera mounted drones being used to locate illegal pot farms. This morning, I wanted to share yet another application of thermal/drone technology.

California is experiencing one of the worst droughts in history, and nobody is feeling it harder than the San Joaquin Valley (SJV) farmer. The SJV is the most agriculturally rich place in the world, and considering that it only makes up 4.5% of the total land mass of the United States, it’s remarkable to imagine that that it ranks first in production of 48 different different crops.

Nevertheless, farms need water, and every drop matters, especially during a drought of this magnitude. So when a group of farmers found their irrigation lines chewed up by coyotes, the need for an aerial survey became necessary. That’s when the company HoneyComb stepped in, providing thermal imagery from one of their drones. The thermal imagery provided the pinpoint locations of water leaks, making it incredibly more efficient to fix the problems and save water.

Zach Sheely, farmer, had this to say about the technology: “So if I can eliminate that job,” he says, “or use that person more wisely than just drive up and back mindlessly looking for leaks, it’s going to benefit my business, and he’s probably going to like his job a little bit better, too.”

Link and Photo Courtesy of KQED

The burgeoning emergence of highly-capable consumer cameras combined with affordable and ready-to-fly (RTF) sUAS has empowered anyone with an interest to become an aerial photographer. The addition of youtube, geotagging, smartphones, and social networks has created a vast network of aerial video and imagery, available to anyone with an internet connection. Drone Analyst posted a great article about the Democratization of Aerial Photography highlighting this phenomenon.

Enabled by the democratization, the applications of UAS are endless. Those that receive the most attention are listed below:

Being that I’ve been a photogrammetry and remote sensing professional for over 5 years, this area is of particular interest to me. The aerial survey industry has long relied on manned aircraft or satellites to acquire geospatial data. Professionals have a proven track record of manufacturing products with high levels of quality and accuracy. Three inch image resolution is the normal standard of high resolution imagery by most firms. Other sensors like LiDAR, synthetic aperture radar, and hyperspectural imagery are common acquisition platforms.

Small UAS have the potential to marginalize the current aerial survey and mapping industry. Their ability to fly low, cheap, and efficient could revolutionize the way geospatial data is collected in the next 2-5 years. Obtaining imagery with low-cost cameras/sensors at centimeter resolution is an absolute a reality at this time. What is lacking, however, is the proven quality and accuracy of these products compared to traditional industry counterparts.

Utility companies are common clients for aerial survey firms. Corridor mapping is highly effective at collecting an inventory of utility infrastructure. SUAS are perfect for this application because of their ability to collect high-resolution imagery or LiDAR in only a few flight lines. 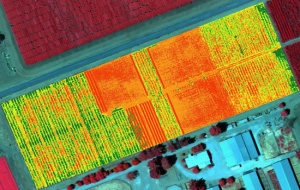 There is a lot of buzz around using sUAS for vegetation analysis. This is achieved by acquiring imagery in the near-infrared (NIR) spectrum and then applying the normalized difference vegetation index (NDVI). Virtually any point-and-shoot can be converted to sense NIR (although quality is still unproven). The thinking around the UAS community is that agriculture will be the biggest market for NIR equipped sUAS. NDVI maps of ag fields would empower farmers to see exactly which fields are healthy and which are not. The Daily Beast wrote a great article about how drones could soon be ubiquitous to American farms.

Search and rescue efforts throughout the world have already benefited from UAS. They are great detectors when equipped with thermal sensors. Unmanned aircraft have been used to detect and fight forest fires, and provide aid during flash floods. Whether used by public or private operators, UAS have already established their beneficial value when emergencies occur.

One of the most obvious and controversial applications is journalism. It’s bad enough that the paparazzi apologetically harass celebrities on foot. Empowering them to shoot above someones private property is a whole different story. These journalism tactics strike the fear of “big brother” in many Americans.

There have been positive results to using drones for journalism, however. UAS have allowed film makers to obtain amazing aerial shots for movies, TV shows, and documentaries.   The makers of the “Flying-CAM Sarah” were recently honored by the Academy of Motion Pictures for it’s work in movies like “Skyfall,” “Oblivion,” and “Prisoners.”

Rather than higher an expensive helicopter or manned aircraft, construction managers are increasingly turning to UAS technology. They are safer, cheaper, and provide all of the information from a bird’s-eye-view that a site manager would want to know. And they enable managers to easily monitor the progress of a site throughout the project’s life cycle.

Real estate is quickly becoming one of the most widely reported applications of UAS. “One 57,” Manhattan’s newest state-of-the-art condominium high-rise, used UAS as an incredibly effective marketing tool by capturing what views would look like on different floors. This enabled potential customers the opportunity to “see” what their view would be before the construction was even finished.

Some UAS operators are making legitimate profits by selling aerial videography services to real estate companies. Even though illegal, news stations from around the country are reporting on this as if it’s ok. 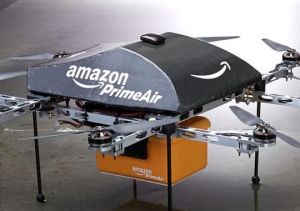 One of my favorite videos is from Domino’s in the U.K. of a drone delivering a pizza. The concept seemed far fetched initially, but in a matter months, there were videos of other companies jumping on the drone delivery bandwagon.

Amazon made the most publicized announcement when it aired a “60 Minutes” piece about future UAS delivery plans. Like many new ideas, there has been criticism and skepticism, but in the long run, I believe Amazon’s “Prime Air” will revolution parcel delivery.