For the optimist, the news of additional funding for UAS integration ensures confidence that the United States is determined to open the skies, sooner rather than later, to commercial drone operations. News, however, that congress is “uncertain when the FAA can integrate UAS into the Nation’s airspace” enables skeptics to roll their eyes at yet another hollow justification of the delays by the government.

Truth be told, “the government is trying to have it’s cake and eat it too.” It’s fantastic that congress recognizes the importance of UAS integration into the Nation’s airspace. But admitting that the FAA may be incapable of fulfilling its duties is does not exactly conjure up positive feelings for those waiting on the sidelines.

Below is an excerpt from 2nd session of the 113th Congress:

The FAA Modernization and Reform Act of 2012 directed the FAA to integrate UAS into the National Airspace System by 2015. However, it is uncertain when the FAA can integrate UAS into the Nation’s airspace and what will be required to achieve the goal. The lack of an overall framework for the new systems may be inhibiting progress on UAS integration. The Committee is concerned that the FAA may not be well positioned to manage effectively the introduction of UAS in the United States, particularly in light of a recent ruling by a National Transportation Safety Board (NTSB) administrative judge regarding the use of a small UAS for commercial purposes. Given these challenges, the Committee has provided an additional $3,000,000 in the Aviation Safety Activity to expedite the integration of UAS into commercial airspace.

I know cliches aren’t exactly the most professional ways of making a point, but the best thing I could say to end this post is: 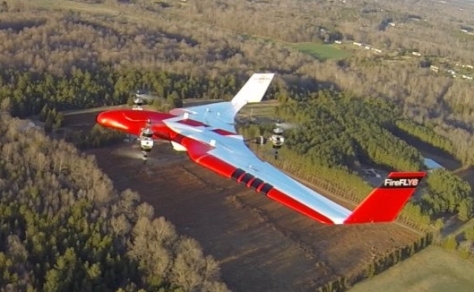 A month ago, I posted about an innovative new approach to the design of fixed-wing drones. When I first saw the JUMP, by Arcturus, I was blown away at how such a simple idea could revolutionize the sUAS industry. By combining the vertical-take-off-and-landing (VTOL) capabilities of a multi-rotor with a fixed-wing platform, the failures associated with a conventional “crash-landing” are essentially eliminated.

Lo and behold, it only took a few weeks for me to start and seeing other hybrid systems already on the market. Birds Eye View Aerobotics’ FireFly6 stood out to me because of it’s simplistic design and economical price (about 800 bucks for everything). Check out the video to see how cool this drone is!

So is this new approach going to be adopted throughout the UAS industry? It will be interesting to check back in a year to gauge how many hybrid systems are out there. Considering the pace of progress, and the willingness of UAV manufactures to embrace new ideas, I would say absolutely.

The video speaks for itself. Enjoy.

The increasing potential of small UAS commercial applications continues to push the demand for rules and regulations to new heights. According to Aviation Week, the FAA is working to expedite COA exemptions for the agriculture, film making, pipeline/power-line inspection, and oil-and-gas inspection industries. For good reason, safety is touted as the number one reason that these industries are first in line for such exemptions. Jim Williams, the UAS integration office manager for the FAA, emphasized “exemptions will be for specific limited and low-risk operations.”

In true FAA fashion, however, Williams complicates matters by stating “there will still have to be a certified pilot with specific training for that type of aircraft. We can’t waive that.” So does this mean an individual with a certified pilot’s licence? If this is true, he is basically defining the requirements of the Special Airworthiness Certificate (SAC) which is already in place. In February, I challenged the FAA on the legitimacy of needing a certified pilot for sUAS operations. A justification was not given.

Maybe Williams is referring to a UAS specific pilot certification. Could it be that the FAA is taking the progressive approach of developing this certification in the very near future? This would be a breath of fresh air because it would help establish the beginning foundations of the regulation process.

I hate to sound like a pessimist, but my gut says that is wishful thinking.

Yesterday, I posted an article about thermal camera mounted drones being used to locate illegal pot farms. This morning, I wanted to share yet another application of thermal/drone technology.

California is experiencing one of the worst droughts in history, and nobody is feeling it harder than the San Joaquin Valley (SJV) farmer. The SJV is the most agriculturally rich place in the world, and considering that it only makes up 4.5% of the total land mass of the United States, it’s remarkable to imagine that that it ranks first in production of 48 different different crops.

Nevertheless, farms need water, and every drop matters, especially during a drought of this magnitude. So when a group of farmers found their irrigation lines chewed up by coyotes, the need for an aerial survey became necessary. That’s when the company HoneyComb stepped in, providing thermal imagery from one of their drones. The thermal imagery provided the pinpoint locations of water leaks, making it incredibly more efficient to fix the problems and save water.

Zach Sheely, farmer, had this to say about the technology: “So if I can eliminate that job,” he says, “or use that person more wisely than just drive up and back mindlessly looking for leaks, it’s going to benefit my business, and he’s probably going to like his job a little bit better, too.”

Link and Photo Courtesy of KQED

The call for comprehensive UAS regulations in the United States has been voiced by everyone in the community, and the FAA has a deadline of September 2015 to appease. A similar universal set of regulations has been proposed for all of Europe by the European Commission. Recognizing the incredible growth potential of the billion dollar industry, the Europeans are trying to collectively establish guidelines by 2016.

“The standards will cover the following areas:”

Being that each European country operates UAS under it’s own jurisdiction, this is an obvious step in the right direction of bridging the regulation gaps for all of Europe.

The full article can be found here.

Here’s something you don’t see everyday. Although a day late, this article should please all of the 4/20 fans out there.

Criminals are now using drones equipped with thermal cameras to locate pot farms – only to later rob them and sell the drugs on the street.

“It is no surprise enterprising criminals would want to get the upper hand in the criminal underworld by using drones.”

Apparently, the amount of heat generated from these establishments is quite detectable, even with a low-resolution thermal camera. Take a look at the photos below, they’re pretty remarkable!

Link and Photos Courtesy of DailyMail.co.uk

As applications continue to grow, I wanted to share an article from the the U.K. about engineering firm MACAW using sUAS for pipelines, energy facilities, and other infrastructure.

“The investment in SUAS will enable us to inspect challenging or previously inaccessible locations, such as bridge crossings and wind farms, in an efficient and safe manner.” – Paul Casson, MACAW Principal Engineer

Link and Photo Courtesy of Bdaily

I wanted to pass along an exciting event hosted by the American Society of Photogrammetry and Remote Sensing (ASPRS) Northern California Region! The UAS Technical Demonstration and Symposium will take place October 21-22 in Reno, Nevada. An abstract of the event is below:

The ASPRS Northern California Region is hosting a 2-day symposium on unmanned aircraft systems (UAS) in Reno, NV on October 21-22, 2014. The purpose of the event is to assemble academia, UAS developers, survey and mapping companies, government agencies, and UAS enthusiasts, to share information, showcase new technologies and demonstrate UAS systems in action (in flight). The event will be held at the Reno Stead Airport, an FAA-designated UAS test site, as well as at a symposium hotel in downtown Reno. The mission of the event is to advance knowledge and improve the understanding of UAS technologies and their safe and efficient introduction into our national airspace, government programs and business.

Information about the symposium and ASPRS can be found at their website, or you can contact me and I will point you in the right direction.

Looking forward to seeing you all in Reno!